Humility, kindness, and generosity resemble the core values which run through the veins of the people of Oman. These values derive from Oman’s deep tradition of multiculturalism and cosmopolitanism arising from the Sultanate’s seafaring empire, which spanned from the coasts of Pakistan and Iran to Zanzibar in East Africa. Regional trade and exposure to different beliefs, cultures, traditions, and languages built a culture of profound reverence of human relationships. This idea of mutual respect and tolerance for others is the foundation of Omani society today.

Omanis are known for their hospitality. An invitation to a home is more than a polite gesture; it is an opportunity to become part of the family. Upon entering an Omani home, the visitor is given a cup of coffee, dates, fruits, and frankincense; resembling the humble gifts to the honored guest. Thus, generosity portrayed through the act of hospitality is an inseparable characteristic of the Omani people.

A Diverse and Tolerant People 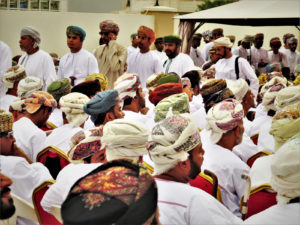 Centuries of regional trade set the stage for Oman to emerge as a united people with a pluralistic heritage and identity. Omanis can trace their diverse heritage and languages to modern day Baluchistan and Sindh in Pakistan, Zanzibar and Dar Es-Salaam in Tanzania, the coastlines of Iran, and the western cities of Yemen.

This diversity of heritage and culture led to a deep tradition of tolerance for different religious beliefs, which is seen in all mosques where Sunnis, Shia, and Ibadhis pray united in their faith. Uniting these diverse identities is a strong sense of national pride founded on the very idea of respect for diversity. Omanis are a proud people, a diverse people, and it is in the Sultanate that we believe students can experience the diversity of the Arab world.