The Sultanate of Oman is defined by its incredible geographical diversity and rich history. The country is about the same size as the U.S. State of New Mexico or the country of Poland with a population of 4.5 million persons. In no other place, in the Arabian Peninsula can one find a combination of pristine coastline, rugged mountains, lush oases, seasonal rainforests, colorful deserts, and cosmopolitan/modern cities. It is no wonder why Oman was listed as a destination on the New York Times Top Places to Visit in 2015 and the Lonely Planet’s Top 10 Countries to Visit in 2017. 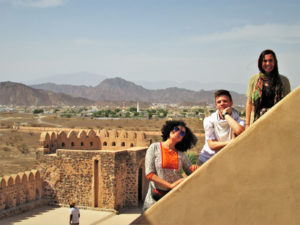 The Sultanate’s diverse landscape is dotted with over 500 historic fortresses and towers which remain as a testament to Oman’s mighty empires. These fortresses were used to defend strategic trade routes, fend-off invasions from the Persians and Portuguese, and protecting Oman’s ruling families. These forts were built of mud brick, stucco, and stone, allowing them to endure the test of time. Some of the forts were built upon small hills, large boulders emerging from the earth, and in the shadows of Oman’s highest mountains. The Bahla Fort is a prime example Oman’s mighty fortresses, it is the biggest fort in Oman and was designated as a UNESCO World Heritage Site. 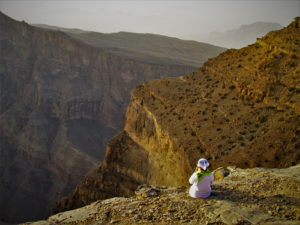 Above all the most distinctive aspect of Oman, is its breathtaking landscapes. Millions of years ago, plate-tectonic movement thrust Oman’s Hagar Mountain range into the sky. The creation of this mountain range molded the Sultanate’s distinct landscapes. Among the most famous sites in Western Oman are the deserts of the Empty Quarter and Sharquia Sands, the rocky valleys of Wadi Bani Khalid and Wadi Shaab, the coastal areas of Musandam and Ras Al-Jinz, and the mountains of Jabal Akhdar and Jabal Shams. Much of central Oman is defined by its flat deserts, where much of the Sultanate’s oil and gas production comes from.

Then to the east lies Oman’s most geographic distinctive region, Dhofar. This region is defined by large bowl shaped mountains which form a barrier between the sea and the desert of the Empty Quarter. For about four months during the summer (between Late June and Early September) this region is transformed by the Indian Ocean monsoon. The monsoon pushes mist and rain upon Dhofar’s mountain range creating a startling profusion of greenery, resulting in a seasonal rainforest. Below Dhofar’s green mountains is Oman’s second largest city, Salalah. Salalah is home to one of the world’s oldest frankincense markets and semi-tropical plantations.